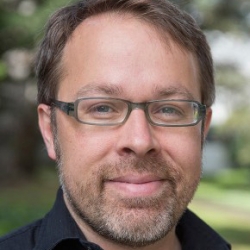 I am interested in the evolution of genome structures and the evolutionary origins of the pronounced differences in genome structure between different species.  To study these questions, I study genomic sequences from a wide variety of species (and sometimes from different individuals within a species) to reconstruct evolution.  I am interested in a wide variety of questions, and I encourage interested students to contact me to talk about possible projects.

My work focuses on the intron-exon structures of eukaryotic genes. Unlike prokaryotes (bacteria and archaea), most genes in the nucleus of most eukaryotic organisms are interrupted by a spliceosomal introns, thus gene expression  requires splicing of RNA transcripts to remove these intervening sequences.

Spliceosomal introns are ubiquitous features of eukaryotic genomes. The average human transcript contains nearly ten introns, and intron removal requires a massive spliceosomal machinery comprising five catalytic RNAs and hundreds of proteins.  Splicing is a major mode of proteome diversification in eukaryotes, and has key roles in gene regulation at the levels of transcription, transcript processing, nuclear export, and translation.  Splicing has connections to chromatin structure, cancer, development, and a wide range of cellular processes, and alternative splicing affects 95% of multi-exon human genes.  For such a multi-functional and integrated system, splicing shows remarkable diversity across species: eukaryotes show orders-of-magnitude differences in intron number (<10 to 200,000 per genome) and intron length (median from 19 to >2000 bases), and pronounced differences in splicing signals (from diffuse splice signals to strict extended motifs) and incidence and type of alternative splicing. These differences imply dramatic, recurrent, genome-wide changes in intron-exon structures throughout evolution, with myriad functional implications.

We work on several questions related to the evolution and function of introns and alternative splicing in eukaryotes.

We are working on a variety of projects attacking these various questions.