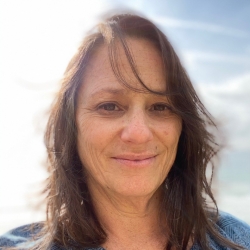 My research interests lie squarely in the fields of Evolutionary Developmental Biology (EvoDevo) and the use of Genetics/Genomics to answer questions about the evolution of diversity in vertebrates, which are mostly fishes. I use molecular approaches to understand the evolutionary forces that generate biological diversity, novelty, and reproductive isolation.

While my research spans a range of topics, the underlying theme is to understand the evolutionary forces that generate novelty, diversity, and what Darwin called “the mystery of mysteries” -the evolution of reproductive isolation.

My recent work has focused on investigating the role of Hox genes in the evolution and development of novel morphological domains such as claspers in cartilaginous fishes (Barry and Crow 2017), cephalic lobes in manta rays (Swenson et al. 2018), the brood pouch in male pipefishes (Hamilton et al. 2016), paddlefish barbels (which are not homologous with zebrafish barbels, Archambeault et al. 2014), and distal elements of the gut of zebrafish and gobies (Archambeault et al. 2014, Crow et al. 2020). Additional projects have centered on aspects of reproductive strategies including sexual selection and the evolution of female Bateman gradients in surfperches (LaBrecque et al. 2014, Izumiyama et al. 2020a, Izumiyama et al. 2020b), multiple embryos per egg capsule in skates (Chiquillo et al. 2014), and the evolution of sex allocation plasticity in gobies (Maxfield et al. 2012). Over the past few years I have discovered amazing secrets about body plan evolution in batoids, which in rough terms can be described as “How you go from a shark, to a skate, to a ray”. An unexpected caveat indicates that strong selection on modes of locomotion has been a driving force in the evolution and development of this group. For example, the expanded pectoral fins that fuse anteriorly in batoids facilitate undulatory swimming in these benthic dwellers (Hall et al. 2018), and the expanded crura in the pelvic fins of skates allowed “punting” in the same environment (Barry and Crow 2017). In manta rays and their relatives, partitioning the anterior pectoral fins allowed separation of feeding and locomotory functions, and the genetic program separating these pectoral fin domains was likely co-opted from a similar pathway separating claspers from pelvic fin domains that arose approximately 200 million years earlier (Swenson et al. 2018).