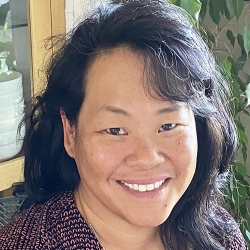 We use the model organism C. elegans to understand how chromosome architecture and dynamics influence gene expression and male fertility.

Project 1:  Histones are proteins that package DNA. We've identified a histone H2A variant in C. elegans we have named HTAS-1. Our initial analysis has revealed that HTAS-1 is a sperm-specific histone H2A variant.  We are using genetic analysis to determine if worms with a mutant htas-1gene are infertile. We've shown that HTAS-1 is indeed required for optimal fertility and are now currently investigating the role of HTAS-1 in chromosome compaction by fluorescence microscopy.

In addition, because HTAS-1 protein differs from canonical H2A proteins in the sequence of the N-terminal tail region (which is known to be post-translationally modified), we are characterizing post-translational modifications that occur on this sperm-specific histone H2A variant.

Project 2: Chromosome segregation during sperm meiosis differs from that of oocyte meiosis and mitosis. We are interesting in defining how these differences are implemented.